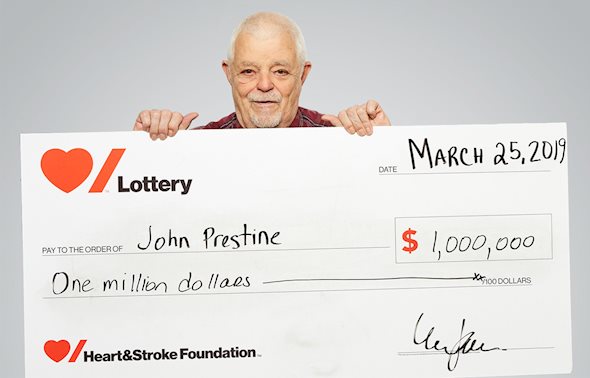 Most people have some ideas for what they’d do with the money if they ever won the lottery. But John Prestine, winner of the $1,000,000 Grand Prize #2 in this year’s Heart & Stroke Lottery, really isn’t sure yet.

“I might travel to Ireland,” says the 78-year-old, who lives in Ridgeway, Ont. “To be honest, I really don’t need it. I’ve been very fortunate. I have more than enough.” High on the list of considerations is helping his nephew with college tuition and giving some to his sister, a caregiver.

Though he’s played the Heart & Stroke Lottery for years – John goes in on several tickets with two friends – the potential prize has never been the motivation. As a child, he was hospitalized for months due to rheumatic fever. “Heart disease has always been on my mind,” he says.

Even winning the big prize once won’t stop John from buying tickets again next year. “We just might win another one,” he says. “That would be something.”

“We just might win another one.“ That would be something.”
More stories about Heart & Stroke Lottery Winners